So last time I promised to show you my original plan for a whole lot of finger knitting.  I’m now here to deliver the goods.  Extreme knitting gets me amped; there’s just something wonderful about holding needles (nearly) as thick as your arm, even if it sometimes feels like a combination between rowing and wrestling and should count as your daily exercise.  There is a point to this, and it’s coming right up.
I hadn’t done any extreme knitting since discovering my allergy to acrylic and thus blowing the cheapest source of yarn out of the water, as I was convinced that this yarn-eating method would prove too pricey with anything else.  Then my interest in finger knitting was revived, and I was curious how well I could recreate a previous project as a rug.
This is the previous project, made holding 10 strands of roughly dk weight together and using extreme cable needles as giant dpns 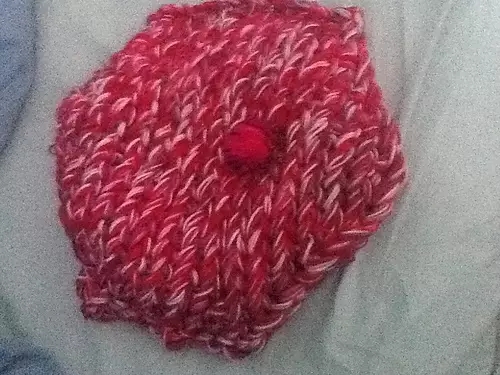 The pattern is the beekeeper’s quilt, and the little speck in a different hue on it is a hexagon in the original size.
So I thought that doing and open cast off on my later one made with finger knitting instead of holding the yarn together would make a nice flat piece if I pushed out and spread it from the middle.  I think we can all agree that it worked perfectly

Since tone is rather hard to convey in writing, I’ll tell you here that I know it went badly.  So badly that I was seriously considering not making this post and denying all knowledge of a project.  And then I told myself that, while anyone who stumbles in here will be the only ones besides myself and himself that see it, at least it’s useable.  Since it’s larger than both of his feet together, it will mean putting feet onto fluffy fug (not a typo) rather than potentially freezing floorboards on winter mornings, and I spent no money as I worked from scrap.  I also know how to make a better rug next time, should I wish to again.

Make a Rug, without the fug

Because I finger knitted my yarn together before getting down to the knitting, the process saved quite a bit of yarn but did make things thinner in areas. The irregularity was caused by using everything from thread through to aran, whereas I had a consistent thickness previously. Stick to the same yarn weight for anything with shaping, and don’t try to alter the end shape as I did. Using a French knitter with different heads for different yarn thicknesses (such as the Clover Wonder Knitter, the only one I know of with this feature) would create less variation in thicknesses if you do want to mix your weights

Stay tuned for a post about toys from Tuesday